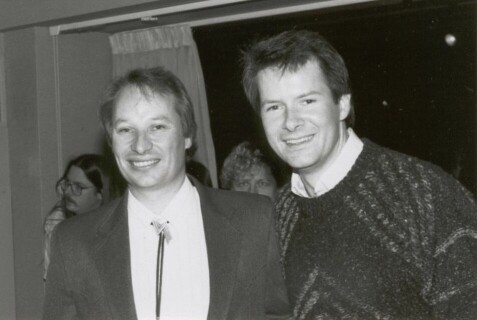 Editor's note: The following interview was originally published in Lights Out! issue 4.

If Texas writer Joe R. Lansdale had been born on a fantasy world, he might be a cross between a lion and a chameleon. His work is full of fierce nobility, and resists being caged. His work changes colors and blends easily into a variety of backgrounds. Joe Lansdale has written horror, science fiction, fantasy, mystery, suspense, westerns, "men's adventure," and just about every other kind of writing you can think of. Joe has done it all, and he keeps on getting better. He won a Bram Stoker award for "The Night They Missed the Horror Show," his novel The Drive-In—nominated for a World Fantasy Award—is like a ride on a runaway Tilt-a-Whirl, and his "Tight Little Stitches in a Dead Man's Back" is probably one of the finest pieces of writing I've ever had the pleasure to read. Just when you think you've got Joe pegged in a particular category, he goes chameleon again. His The Magic Wagon is a bonafide western, complete with a gunfighter and a wrestling monkey. Well, you can't say—you dare not say—Joe isn't an original talent. He knows one of those Oriental killing techniques that I can't pronounce, and he used to hire himself out as a personal bodyguard when he lived in San Francisco and had hair down to his butt.

I digress. Joe conducted one of the first interviews I ever did, for Twilight Zone Magazine back in 1986, and I'm glad to have the opportunity to turn the tables. Let's get one thing straight: I don't like everything Joe writes. I think he can be colder and crueller than Hell. He doesn't like everything I do, because he thinks I sentimentalize too much and that I overwrite. Joe is of the school of true grit and hard knocks, and he says what needs to be said and no more. One of his first jobs was picking roses. He says the smell made you sick after awhile, and your hands got cut up by thorns. You need tough hands to pick roses, it seems to me. Joe's got 'em. And if his stories were roses, pulled from his imagination as if from a field under the hard blue Texas sky, he leaves an occasional thorn on the stem so he can draw a drop of blood. That way, we can have a little pain with our pleasure. Which seems to me what writing might be all about.

Joe has a new collection of short stories out, called By Bizarre Hands and published by Mark V. Ziesing. It's a beautiful-looking book, and is a terrific scope of Joe's talent. Joe doesn't sit still very long, so it's time we got to the questions.

What's your favorite piece of your own work?

Joe: "`The Night They Missed the Horror Show.' That's my favorite. It's closer to me because it's been with me for a long time. It's based on real incidents. Things that happened to me, things that happened to friends of mine, stories that I heard that I knew were true. I wove all those things together, and I think I really captured a certain element there that I remember from growing up."

Does that story particularly appeal to you because it mirrors something about you?

Joe: "Yeah, I think so. It mirrors where I came from. That's not saying that everybody I grew up with dragged dogs behind cars or were racist. Racism is a thing that bothers me very, very deeply. My feeling about racism probably appears in my work more than any other thing. It's in almost every story. I know people who are otherwise really fine folks, except they've got this blind spot about racism."

I do too, and that's probably because of growing up in the South. Racism used to be part of who you were, at least in an "Old South" sense. It's like the good old boys mindset.

Joe: "Right. And a lot of those people who might make racist remarks would never ever think of hurting anybody of another color. I left Texas for California partly to get away from that racist attitude, and I found out California wasn't a lot different, though people didn't make obviously racist remarks. But the South is an easy target. When you write about racism in the South, everybody figures that's the status quo. It's not, because racism is everywhere and certainly not just in the South."

Is there a work you wish you hadn't done or wish you could change?

Joe: "I could probably go back and rewrite a lot of things now, because I know more about writing now. But I don't regret anything I've written. I don't regret any of the viciousness...you know, people may say this earlier book or short story I did was crude or too bloody or something like that, but I always knew what I was doing. I was always trying to push it as far as I could go. But I wish I could rewrite some of the prose, make it more clever or clear what I meant to say."

You say you wanted to push things as far as you could go. Why was that?

Joe: "Back when I did Act of Love, that was before Clive Barker or splatterpunk. I wanted to write something very powerful and visceral. This was before the movies were doing graphic horror, too. I guess this was late 1979 or 1980. The closest thing to what I wanted to do at that time was the work of Sam Peckinpah—which, if you look at it now, is pretty tame. I didn't want to make violence insignificant. I wanted to make violence nasty, I wanted to make it bother you, but I wanted to make the story compelling. The thing that made me write Act of Love was anger. I was angry that so much attention was directed to psychopaths and murderers and very little attention given to their victims. So when I wrote a scene of butchery, I wanted to build sympathy for the people the violence was done to."

Your scenes of violence are intense, but they're usually short.

Could you be happy if a publisher said, "Joe, we want you to write one thing: horror, mystery, westerns, or whatever. But just one"?

Joe: "Uh uh. No. It would break my heart. And it is said to me; it's said all the time. What I'm concentrating on right now are the novels and on suspense. I think suspense is a broad field, and that's what I need. I think I'll continue to write horror and science-fictional types of things in shorter pieces, but it looks like I'm moving away from doing those in novel length. I'm trying to do what I like to do without compromising my work, but also reaching a wider audience."

I hate those labels publishers put on a writer's work, but that's how the business is.

Joe: "I hate 'em, too. I've always known what I've wanted to do, but it's been hell on me. My friend Bill Nolan has been a major influence on me, and he advised me not to skip around from category to category. Bill has taught me to have a game plan, which is real important."

But you basically write for yourself, don't you?

Joe: "Yeah. I have a game plan in the sense that I think about my career and where it's going, but I write for myself. It's obvious. I've written westerns, horror, mystery, science fiction, all kinds of things."

And some things that defy a category, like The Drive-In. What is it? Fantasy? Horror? It's an excellent book, but I don't know how to define it, and defining it really isn't important.

Joe: "I wish they'd just market my books as Lansdale books. I think I've proven myself. But The Drive-In is quirky as hell. It's kind of a cult book, and it's not for everybody."

But it really has your voice.

Joe: "Yeah, and I'm starting to think a voice is what makes a writer. I used to think it was plot. Then I thought it was character, and then I thought it was theme. I guess all those are important, but a writer's voice has to be there. Ultimately, a writer has to develop some sort of tone that keeps you turning the pages. I think Stephen King has a tremendous voice. That's been his biggest asset. His voice is easily recognizable, and that's pretty important too."

Do you have a dream book you'd like to write?

Joe: "Yeah, I do. A big, historical western that would be realistic and funny at the same time. Sort of my Little Big Man, though the story isn't anything like that."

You've been thinking about this for awhile?

Joe: "For years. But I feel like I could miss the time to do it. Even though I do write for myself, I believe that when you have any kind of commercial success, it affects how you think. When you reach a wide audience, you have a tendency to think, `God, what did I do right that time?' I don't know how many writers I've seen who write the same damn book over and over and over again. That's like me saying, `Well, I know what the public expects, so I've got to give it to them.' I'm concerned with what I want to read. That doesn't mean I'm not going to screw up and make mistakes, but I want to do the best that I can do with every book and not think about having a public who expects a particular thing."

I don't like to think about my books going out to thousands of people. That's nice and all, but it makes me nervous to think about. It's kind of unreal.

Joe: "I'm flattered by the attention I'm getting, but it embarrasses me too. And there's a side of it that's seductive. I mean, you're going to get good and bad reviews, and just because you get good reviews doesn't mean somebody's not out there wondering what the hell you're trying to do. You can't be universally admired. It's seductive to believe you're doing everything right when you know you're not."

Where would you like your career to be in five years?

Joe: "I'd like to be doing suspense novels. I'd like to be out of what some people would call the labels ghetto, and be marketing Lansdale books. I want to do suspense novels, but I'd like to continue to do what I'd call `off-beat' books for the smaller presses. Short story collections, too. Other than that, I want to keep on writing and not get bent into that seduction of success we were talking about. I want to keep on writing for myself, and if people like it, that's fine too."