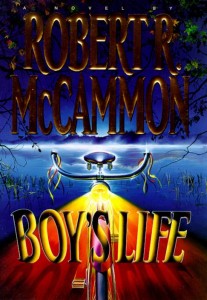 In May 2006, Robert McCammon’s 1991 coming-of-age classic Boy’s Life
made the news when a parent in the Hernando County School District near Tampa, FL, challenged the book as inappropriate for the Nature Coast Technical High School library. Boy’s Life was one of ten challenged books. The Hernando County School Board convened several meetings over the summer to review the challenges.

School board member Sandra Nicholson apparently never read Boy’s Life, but found it listed on a web site devoted to banned books. One such site featured excerpts from Boy’s Life showcasing examples of “bad” language in the story. Mrs. Nicholson read these excerpts aloud during the school board meeting in May, which prompted the board to put aside the purchase
of Boy’s Life until further reviews could be conducted.

On September 19, 2006, the school board met for a final time to make a decision about the challenged books. Robert McCammon flew to Florida to attend the meeting.

“I want to come to the meeting (and) state my case for the book,” McCammon said. “The book is being misrepresented. I can’t let it be tainted.”

McCammon addressed the school board, which ended up approving Boy’s Life and eight other challenged books.

Presented below is the text of Robert McCammon’s appeal to the Hernando County School Board on September 19, 2006.

For more information about the story, here are PDF files of newspaper articles covering the events.

Audio and video of McCammon’s presentation

Mrs. Nicholson and I share an era. We were both born in the 1950s, and we’ve lived through many tumultuous times. Boy’s Life is about four good boys living in an Alabama town called Zephyr, and about the era that Mrs. Nicholson and I share.These four boys over the course of a year come into contact with a changing world. One does not survive, and all are drastically changed themselves…but are made stronger and better for the changing.

I think Mrs. Nicholson remembers the era of heroes and villains. I certainly do. The Lone Ranger, the Green Hornet, Captain America, Captain Kangaroo. The good guys. Crabby Appleton, Dr. Fu Manchu, the German soldiers on the TV show Combat, any cowboy in a black hat. The bad guys.

Many changes in our country have been for the better. One most certainly has not.

The loss of the good guys. The blurring of white hats and black hats, until all you get is a murky and unreliable gray.

Boy’s Life sets out to show the difference between the good guys and the bad guys. I suppose for that reason alone it is a hopelessly old fashioned and nostalgic book. Does it have profanity? Indeed it does, and actually more than I recall putting in there when I wrote it. Is some of it tough, and nasty, and makes your skin crawl? Absolutely yes.

I would say that I did not write it for young readers. However, over the course of this book’s life, it has struck a chord with young readers. I don’t know why, since it’s set in an era that was lost before they were born. I think it must be something universal, something of yearning and struggle and change and fitting into a world that is very often filled with frightening shadows.

One thing that I believe Boy’s Life does very well. Extremely well. Is showing the difference between the good guys and the bad guys.

Every character who speaks a profanity in Boy’s Life is a “bad guy”. In the illustrations that Mrs. Nicholson has offered, “Hold still, you shithead!” is hollered by a wretched carnival worker to a creature in his care. The creature is a dinosaur…a triceratops. A wondrous creature, a unique last of its kind. And this wretched, soul-sick man does not see the wonder, he only sees the garbage.

The second illustration that was made. “Where’s the money, you motherfucker?” was spoken by an equally wicked man in a dream sequence that the hero of the book experiences. He is led to a big city by benign characters representing the Mummy, Frankenstein and Count Dracula, and shown the evil that waits for him out there, and that he must be strong enough to recognize and resist.

In fact, the whole line reads, “Where’s the money, you motherfucker?” the first man said in a voice of quiet evil.

This book does have profanity. But it is not a profane book. You might ask why did I use such graphic profanity, when I might have shown someone wore a black hat by…wearing a black hat?

Well, every profanity they speak is a black hat. I wanted the bad characters to have bad language, bad habits, and to be reaping the results of bad choices. Is this a glorification of the “bad guy”? No. It is a condemnation.

No good character in Boy’s Life speaks a profanity. Now, having said that, I do remember how young boys talk, and so there are a few good-natured “Numbnuts” thrown about.

As I say, perhaps hopelessly nostalgic and old fashioned.

But this book marks a clear pathway. You go up, or you go down. The choices you make stay with you forever, and you wear the color hat of your decisions.

I always wanted to think of myself as “the good guy”. Now we hear in our popular media, “its wack to be a good guy,” or “it’s
a sucker’s pose”, or the old chestnut, “Good guys never win.”

In this book, they do win. And they win clearly and convincingly because they have recognized which path leads up, and which leads down.

I wish I had time to read you some of the letters I’ve gotten from people, including high school students, teachers, school counselors, pastors, librarians, parents in Japan, Scotland, Texas, Hawaii and just about every place between. I’d like to quickly read one letter, if I may:

I am 15 years old and my name is Judy Gaver. I have wanted to write ever since I could. I wrote my first story when I was 4 and it was really corny but it shows who I am.

I have only read two of your books so far, Boy’s Life and Swan Song, but they are my favorite books and I own them both. Hove the way you use details and the way you make language visual. I can always see the story when I read your books and I really admire that. Right now, I’m doing a novel which is probably pretty stupid because I’m so young and I’ve never even had a short story published yet (which is what I’ve heard you are supposed to do first). My dream is to see my book in a store. I just sometimes fantasize about it (no wonder I have no boyfriend).

I wanted to ask you a few questions. What kind of things inspired you as a child? For me it is my mother and other books and “The X-Files” (the coolest show on the air!). What should I do to prepare to be an author? What should I take in college and, if you know, what colleges are really good for creative writing? Finally, what should I do in in order to be able to write like you? (Once when I was writing, I read a piece of one of your books and when I went back to my writing, I got depressed because I felt I could not write well. I didn’t write anymore that day). Have you ever felt like that? Who were your favorite writers as a child or teen? Mine is you.

I’m sorry if I took up too much of your time but I felt compelled to tell you how much I enjoy your works. I’ve read Boy’s Life three times now, first when I was 13. Will you be writing any more books soon? Please do. I really like them. Thank you for taking time out of your busy schedule to read this letter. If you could, please, please, please write back! Thanks again.

To finish, there are so many young people who might read Boy’s Life and see their own creativity take flight, and possibly their own dreams of writing come true.

And one thing they will take from Boy’s Life into the future is a clear understanding of the difference between the “good guys” and the “bad”.

Copyright © 2006 by Robert McCammon. All rights reserved. Reprinted with permission of the author and Judy Gaver.