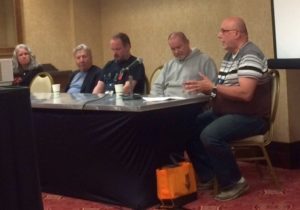 At least it was supposed to include Tom Monteleone.

“He’s finishing a reading,” FPW explained “He’ll join us later.” JRL added that the other LAA winners at the convention that weekend, poet Linda Addison and editor Ellen Datlow, had wanted to participate, but each had a prior commitment during that time slot, and it wasn’t possible to find another time when all the parties were available.

JRL began by discussing the requirements for the LAA. The nominee has to still be alive. The nominee has to be over age 60 or must have been active in the field (e.g., publishing) for at least 35 years. Finally, the recipient’s work has to have made a lasting impact on the horror genre. “We gave the award to an actor once,” JRL recalled, “but usually it goes to a writer.”

The first year the LAA was given, in 1987, it was shared three ways among Fritz Leiber, Frank Bellknap Long (FPW commented that he’d never met Long; JRL observed that he’d been part of Lovecraft’s circle of writers and correspondents), and Clifford D. Simak. “We had to make up for a lot of time,” JRL explained. He said it is still possible for the LAA to be given to multiple winners (up to three people at a time), but only if the committee unanimously agrees on the recipients. Apparently that’s difficult to accomplish.

The panel discussed the process of selecting a LAA winner. The committee refers to a list of approximately 50 people who meet the qualifications. “Sometimes someone will say, ‘Well, you know, so-and-so is sick…’ Should that make a difference?” PF asked.

PF said that as chairman, he allows the committee to nominate selections and vote and will only cast his vote if a tie-breaker is needed. He named some of the members from past years’ committees and joked, “They’re mellow people who don’t have any strong opinions.”

LM complimented PF for his work chairing the committee. “Technically, we’re supposed to replace the chairman every year, but Patrick does such a great job that I’ve kept him on.”

They talked about how the committee last year had decided to give the award to a poet. A couple of names were suggested, and though Linda Addison’s wasn’t one of them, through discussion, the committee arrived at selecting her.

Some winners stimulated controversy. PF and JRL recalled objections when Michael Moorcock was given the LAA. “‘He’s a fantasy writer!’ ‘He’s a sci-fi writer!’ Why are you giving it to him?”

JRL asked the winners about their experiences in receiving the LAA. “Some winners have told us they feel like getting the award means their lives are over, that they’re not expected to achieve anything more. I’ve even heard, ‘I wish you would call it the Half-Lifetime Achievement Award. I feel like I have a lot of my best work ahead of me still.’ Was that your reaction? Did you feel like it was all over for you?”

JRL cited FPW’s productivity. “I think you’ve written almost as many books since you won the award as before.”

RMC said he was very grateful for the honor. It came at a dark time for him. “I had been having trouble with my publisher, Simon & Schuster.” S&S had undergone a lot of reorganization (it sounded like it had been acquired by another company). “All of my people—the editors, the people I had been working with and who knew me—left and new people came in. The new people didn’t like me. They didn’t get my work. They didn’t like Speaks the Nightbird. They like it now because it’s made a lot of money for them.” He said the company even wanted to pay him less money for his work than for his previous book. “I was fighting for my life as an author. I did think my life was over. And to get the news about this award was a turning point.”

LM remarked that when she’s notified winners that they’ve been chosen, they tend to be very surprised. “I say to them, ‘Why don’t you believe that we would pick you?’”

JRL asked RMC how he’d come up with the idea for the Horror Writers’ Association.

RMC bowed his head and joked, “I was lonely. I wasn’t near any other horror writers. Other genres have organizations and conventions. There’s the Mystery Writers of America, and many different science fiction organizations. I thought, ‘Why can’t we do that?’ I mentioned it in an interview, and people responded. I got so many letters from people who loved the idea.”

“All except the name: HOWL,” JRL said. LM explained that stood for Horror and Occult Writers’ League.

“That was my agent’s idea,” RMC defended. “I didn’t know anything about it until I saw the article in Publishers Weekly.”

“And the answer to ‘Howl’ was ‘Hwhuh’?” JRL wondered aloud.

RMC talked about how Joe and Karen Lansdale assisted him in starting up the HWA (then the Horror Writers of America), and Dean Koontz did a lot of work during the first year. He expressed his happiness at how the organization has grown over the years. It now has chapters in Europe. He specifically credited LM’s hard work in promoting the HWA.

PF thanked RMC for starting the HWA and raved about the wonderful experiences he’s had as a member of the organization. Throughout the weekend, many people expressed similar sentiments of gratitude for the support and camaraderie they’d found in the organization.

JRL also cited RMC as the first recipient of the HWA’s Best Novel award for Swan Song. “Swan Song. That was a huge book. You write lots of big books,” FPW observed. “I remember once at one of these conventions you told me you had just thrown away 300 pages of a novel that wasn’t working out. Three hundred pages! That’s about as long as one of my books.”

About half-way into the panel, FPW’s cell phone went off. He apologized for the noise and answered it. “Where are you? (“It’s Tom,” he told us) No, it was for 2:00. We’re here now. We’ve been sitting around waiting and chatting about the weather.” He hung up. “Tom’s on his way. He thought it was at 3:00.”

Soon after, TM slipped in through the back of the room and made his way to the table at the front, to audience applause. “You just pulled a Harlan Ellison,” RMC teased. “You should have come in here carried on a chair.”

Once seated, he was asked about his experiences with the LAA and with the selection committee. TM had been one of the people who compiled the master list of eligible nominees. “Are you still using it?” he asked PF. “Good. It took many hours to put that together.”

TM had also been on the committee to choose the winner for 2018. “At first, everybody else wanted a particular director. [At no time were any of the runners-up for the LAA named.] I told them, ‘Movie people never show up! They’ll send somebody from the mail room to pick up the award.’”

“The winner doesn’t have to attend,” LM objected. “We didn’t expect Graham Masterton to come here all the way from England.”

JRL asked the winners, “Which of your books best represents your work? Which would you recommend to a reader who’s about to read your work for the first time?”

TM named The Blood of the Lamb. “I was writing religious thrillers long before anyone put the words ‘Code’ and ‘Da Vinci’ in the same sentence.”

FPW suggested either The Keep or The Tomb, the latter of which is the first in his Repairman Jack series. “It wasn’t meant to be a series. I was going to kill him off.”

RMC chose The Listener. “I’m very proud of it as a respectful representation of Black dialect and Black characters. The characters use a dialect that I remember hearing when I was growing up.”

Then it was time for questions. One fan asked FPW, “How could you think of killing off Repairman Jack?”

“I kept it open toward the end, to make it seem like he wouldn’t survive, but in the end I decided to bring him back.”

Someone else asked of the committee members, “How do you make your decisions? Do you all just go into a room and yell at each other?”

“That would be hard to do with the panelists in different cities,” PF observed. “We usually e-mail each other.”

Another person asked the LAA winners if they ever felt like they were in competition with one another. They all denied it. “I don’t worry that someone isn’t going to read my books because they’re reading other people’s books,” FPW said.

TM echoed that. “I don’t feel like I’m in competition with anybody else. I’m happy for their successes.”

“I like coming to conventions and seeing my friends. It feels like we’re a family,” said RMC. Indeed, the warmth among the authors was evident and uplifting to see. 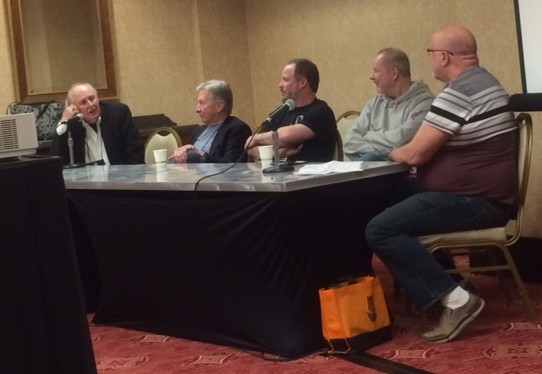