I went to Gatlinburg, Tennessee for a few days with my daughter Skye!

Please forgive that this missive has nothing to do with my writing. But I did want to report on this very cool trip Skye and I took in August, show some pictures, and talk about a real gem of a place we found that was unexpectedly excellent.

Well, first off when we got to Pigeon Forge—which is the town you go through just before you get to Gatlinburg, up in the Smokies—we had to, had to, HAD TO, stop at a Baskin-Robbins. There no longer is a Baskin-Robbins in our hometown of Birmingham, and why this is I don’t know. But I had double fudge brownie ice cream with chunks of brownies in it, and it was great. I forget what she had. Something chocolate, also? But I think mine was best so maybe that’s why I don’t remember hers…though she’ll let me know what it was soon enough.

Okay, we trundled on into Gatlinburg but on the way there you pass along a wide highway with “tourist attractions” on both sides. Now…some of these “tourist attractions” were shall we say a little less than attractive to Skye and myself, but still…they’re there if you want ’em. And if you love pancakes, there are about a hundred and forty three pancake restaurants on this highway, so have at it!! (Skye is still on my case that I had a waffle instead of pancakes. Somehow she thinks pancakes should be the main focus of a Gatlinburg breakfast, especially if they are chocolate-chip pancakes. Just sayin’.)

Being an aficionado of wax museums, Skye arrowed us right into the Hollywood Wax Museum on our first night. I will say that this museum is not the equal to Madame Tussaud’s, but still it was fun. See the pictures of us with some of the figures in there. I will not be responsible for anyone thinking Hugh Hefner (his wax figure, at least) and I had anything going on. The quality in this museum was mixed, but…the horror figure area was really very cool and very well-done. Skye did a lot of camping and vamping with the figures, and I got a new shot for my website and Facebook of me standing behind Lon Chaney’s “Phantom Of The Opera”. See, it’s supposed to be that I’m so hideous even The Phantom is afraid of me, and…oh well, if I have to explain it…as Skye might say, “Don’t go there, Dad.”

A fun evening at the wax museum. Of course Michael Jackson had to be there. And Tom Cruise. Interesting about the Tom Cruise figure…you were unable to tell how tall or short he is because he’s hanging suspended from cables overhead. Again, just sayin’.

Okay, we had a lot of fun and rode the SkyLift—which actually lifted a Skye—and we went up to the Ski Lodge and we went to Ripley’s Believe It Or Not Museum and went to a comedy play where Skye was called up from the audience to play a part in a “silent movie” and other excellent stuffs, but here’s the real deal I wanted to tell you guys about.

The Titanic museum in Pigeon Forge.

From that central highway I mentioned, you see a pretty good-sized replica of the Titanic and a life-sized White Star ticket office. A very awesome thing is that when you buy your ticket, it’s imprinted with the name of an actual passenger who was aboard the Titanic, and in the museum’s final room there is a very stirring display with the names of those who lived and died and you learn the fate of “yourself”. I was Colonel Mustard, I believe, and I survived. Not really that name, but he really was a colonel and he did make it through. Skye’s character was Cherry…forgot the last name…but somebody who sounded like a dancehall girl, and she also made it. I’m being light here, but let me tell you that this final room is surprisingly emotionally-charged. It was neat also, as Skye and I toured this museum, that we realized 2012 is the hundredth-year anniversary of the disaster.

Honestly, I urge everybody to go to this museum. It is awesome. You get the backstory of how the ship was constructed as well as a “tour” of the ship, and it is extremely well-done. At one point you’re walking along and suddenly water begins to flood down some steps and into the room you’re in…almost, but then this cleverly-devised illusion behind a glass wall drains the water off and…well, it’s just fascinating. So you go up the Grand Staircase and see staterooms and the Gentlemen’s Smoking Room, and it’s all done so well and the employees and guides are dressed as Titanic officers and crew and…wow.

Then you get to the bridge. Ahead of you the stars are as they were in the sky that night of April 14th at about 11:40. You go outside the bridge into the deep blue night and face an iceberg…really kind of an ice-sheet, but interesting nevertheless. Then one of the uniformed “officers” suggests putting your hand over “the side” and into…

…a tank of 28-degree water, which is what the water temperature was when the Titanic sank two hours and forty minutes after hitting the berg.

This is where it gets to you.

I said to Skye, “Try to put your whole arm in”.

Yes, 28-degree water is…this is where it gets to you.

A deadly embrace for a body to have to fall into. I’ll never forget what that felt like.

So when you get to that final room with the names written there, and you see that many families were survived by wife and children while the father’s name is on the other list, and you see that most of the drowned were third-class passengers with foreign names, and you see that the great majority of the crew perished, and of course the captain went down with the ship and so did the Titanic’s architect, Thomas Andrews…I’ll tell you, you feel in your heart for people who perished so long ago and yet one hundred years falls away in an instant. This room is a small church that speaks of all the motives and emotions and joys and agonies of humankind…for in two hours and forty minutes, so many choices had to be made. It’s a heartbreaking room, seeing those names and their ages, and seeing young and old, the elderly and small children, and men and women in the prime of life who went into that 28-degree water.

Quite a place, that is. And I have to say, unexpected in Pigeon Forge, Tennessee.

Go if you can. Tour the ship. Feel that water. Go into that room and read the names. Quite a place, that is. We were unable to take pictures there, but somehow that’s okay. Maybe it’s better that the pictures you took were in your head, for yourself alone.

Well, Skye and I had a super time. I am blessed to have a very cool daughter. I am blessed, in so many ways. And oh yeah we played Skee Ball and won about three hundred tickets, enough for a plastic snake worth a Chinese quarter.

That was part of my summer. I hope you had a great one, too. 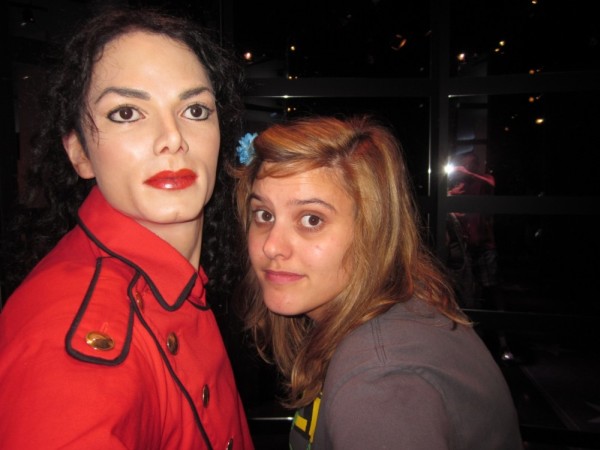 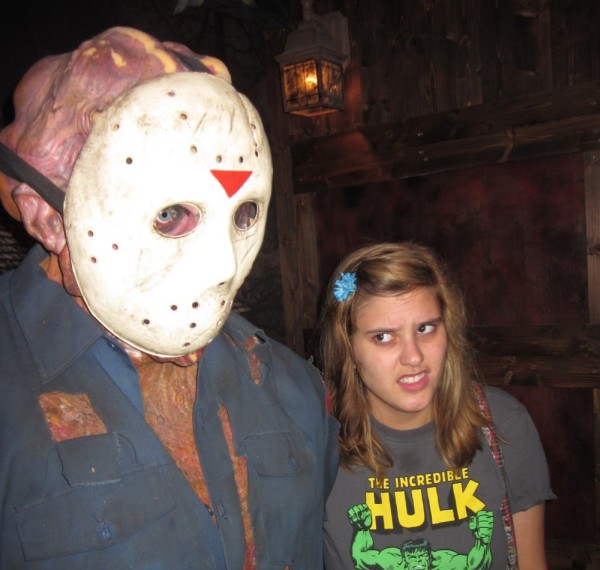 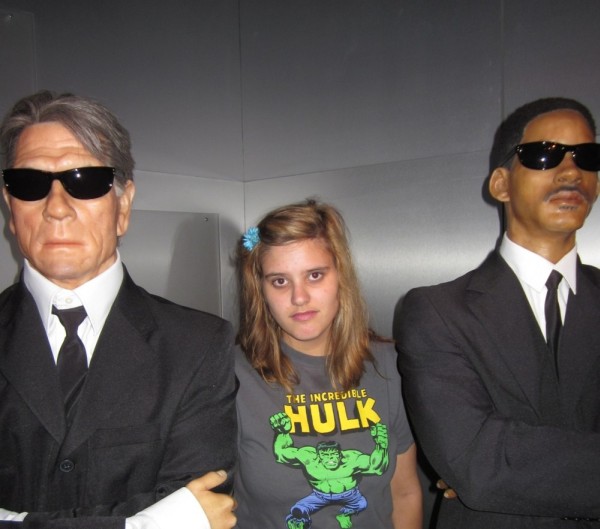 Skye and Men In Black 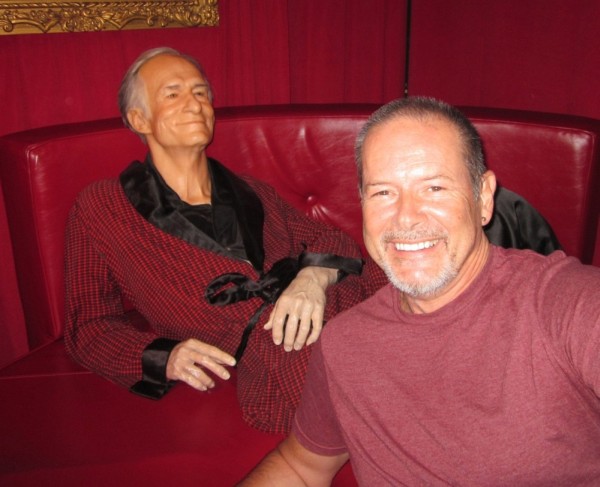 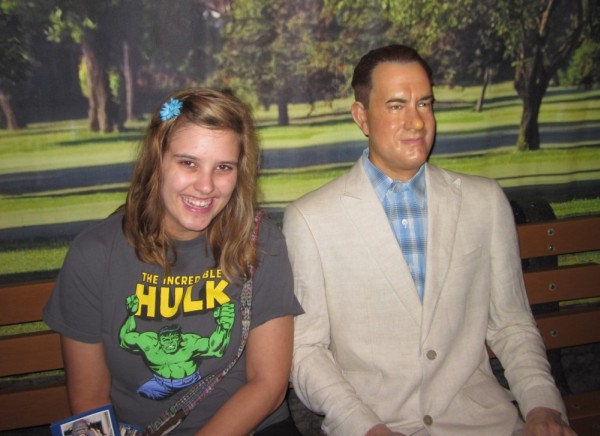 Skye and Tom Hanks (“Life is like a box of chocolates….”) 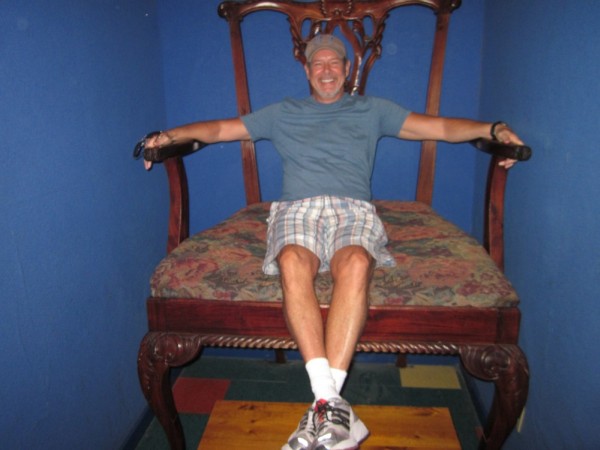 Robert McCammon and the big chair at Ripley’s

One Response to “Robert McCammon: What I Did On My Summer Vacation”