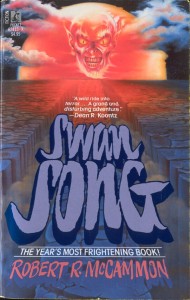 Hi again, guys. I wanted to check in and thank you for all the kind comments about Swan Song. I’m glad you enjoyed that book and certainly glad you still have an interest in it.

I see that James Melzer’s review of Swan Song includes a picture of the original cover, and I have a story to tell you about that.

When that original cover was presented to me at Pocket Books, I hit the roof. I begged and pleaded for them not to use what I considered to be a “cartoon” depiction of evil. I offered all sorts of options. I even drew my own picture of what I wanted the cover to be, which was a nuclear cloud with a barely-defined “face” within it. (Actually, that picture was used in a reprint edition).

Anyway, I went around and around with the publisher at Pocket over what I thought was a “comic-book” cover. Basically, I was patted on the head and told to go away, because the art director knew what sold and he knew what the market wanted to see.

I asked to speak with the art director.

He walked into the office wearing, as I recall, a hot-pink tie with a sickly-green coat. Looking at his mismatched and garish clothes made me feel a little sick. But I realized, this is why the garish colors are on the cover of the original Swan Song…art is in the eye of the beholder, even if that eye is nearly half-blind or otherwise unable to see anything but a blast of miasmic and frenetic hues.

So…that’s why the incandescent red-and-orange clown face is on the cover. They came to their (color) senses only years later at Pocket, with the latest edition that I think looks very good. But that first cover…OMG!!!

Again, thanks for the comments!