Open Road Media has a “Scary Reads” ebook sale running through Halloween! Included among the titles on sale: Robert McCammon’s The Wolf’s Hour, now only $1.99 for all ebook formats! Click on the image below to view all of the “Scary Reads” ebooks. 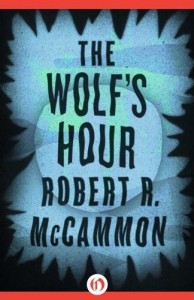 From the Jacket Copy:

On the eve of D-Day, a British secret agent with unique powers goes behind Nazi lines Michael Gallatin is a British spy with a peculiar talent: the ability to transform himself into a wolf. Although his work in North Africa helped the Allies win the continent in the early days of World War II, he quit the service when a German spy shot his lover in her bed. Now, three years later, the army asks him to end his retirement and parachute into occupied Paris. A mysterious German plan called the Iron Fist threatens the D-Day invasion, and the Nazi in charge is the spy who betrayed Michael’s lover. The werewolf goes to France for king and country, hoping for a chance at bloody vengeance.

Also, the Audible unabridged audiobook editions of both Michael Gallatin books, The Wolf’s Hour and The Hunter from the Woods, will be released on MP3 CD on October 28, 2014.

3 Responses to “Ebook sale: The Wolf’s Hour is only $1.99 through Halloween”