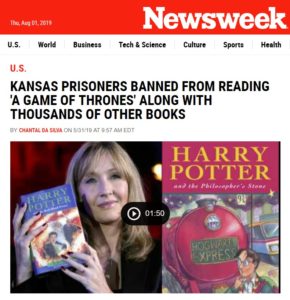 Over the years, I’ve heard from dozens of people who have written to tell me that a Robert McCammon novel (often Swan Song and Boy’s Life) was the only thing that got them through a period of incarceration.

I just discovered the website Prison Legal News, which recently launched a project aimed at tracking the books that are banned in prisons in the U.S. Newsweek recently published an article about the project:

Newsweek: KANSAS PRISONERS BANNED FROM READING ‘A GAME OF THRONES’ ALONG WITH THOUSANDS OF OTHER BOOKS

The project currently only has lists from eight states, but Robert McCammon books show up on two of the lists, so far. These titles are currently banned from prisons in the named states:

Prisons aren’t the only places where books are banned. Some schools also ban books. One such case took place in 2006 in Hernando County in Florida. Robert McCammon actually traveled to a school board meeting there to defend Boy’s Life. You can read about it and see video of his presentation here.