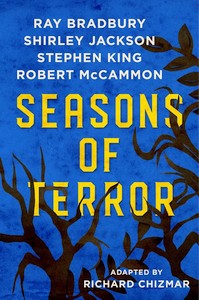 Back in September 2019, Cemetery Dance announced a new illustrated anthology, Seasons of Terror, that would include an adaptation of Robert McCammon’s short story “The Man from London,” which originally appeared in The Hunter from the Woods.

The next month, Gallery Books, an imprint of Simon & Schuster, announced a trade paperback edition of the book. Gallery Books originally scheduled the release for March 31, 2020, but the pandemic pushed back its release until March 23, 2021.

Gallery Books has now pushed the release date even farther out. Amazon and other retailers are now showing a release date of November 1, 2021.

For full details about the books, click here and here.

The release schedule is dictated by Gallery Books. The Cemetery Dance editions will be released around the same time as the Gallery Books release.