Silver Shamrock Publishing will release a new anthology, Midnight in the Graveyard, collecting ghost stories from twenty-five different authors. Included among the contents will be a reprint of Robert McCammon’s ghost story “Haunted World,” which has previously only appeared in print in the 1989 anthology Post Mortem.

The Kindle edition can be pre-ordered at Amazon. The paperback and ebook will be available on October 15, 2019. 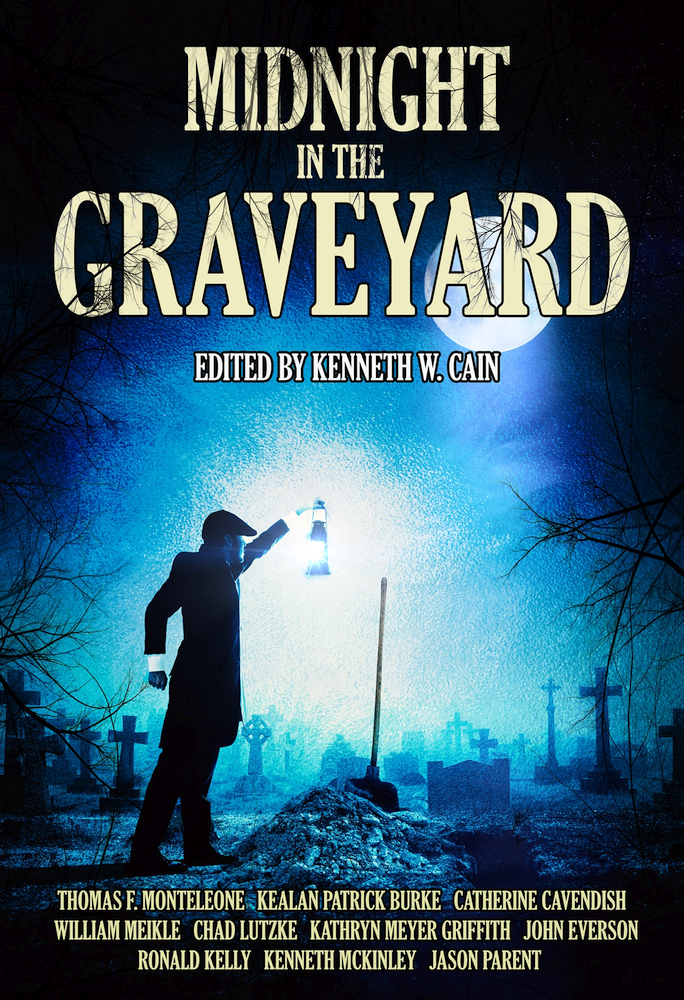 The most recent newsletter from Borderlands Press included this paragraph:

Series III is almost completely sold out. It’s not too late to subscribe to the entire series of great Little Books with some upcoming writers such as Ramsey Campbell, Robert R. McCammon, Caitlyn Kiernan, and others to be announced. To set up your subscription, Contact us at [email protected].

If you’re not familiar with the Borderlands Press Little Books, they are a series of little books featuring a variety of content from the authors. Some are collections of new short stories, some collections of reprints, some collections of essays, etc. Each book is a different color. Titles include A Little Purple Book of Phantasies, by Gahan Wilson, and A Little Cobalt Book of Old Blue Stories…and Stuff, by Mort Castle.

There are no details yet on the Robert McCammon book, but I can tell you that he plans to write four new short stories for the book. I’ll provide more details when I can.

A subscription to the series is not necessary. The Robert McCammon book will be sold individually, and Cemetery Dance posted that they will have copies available for sale, too. 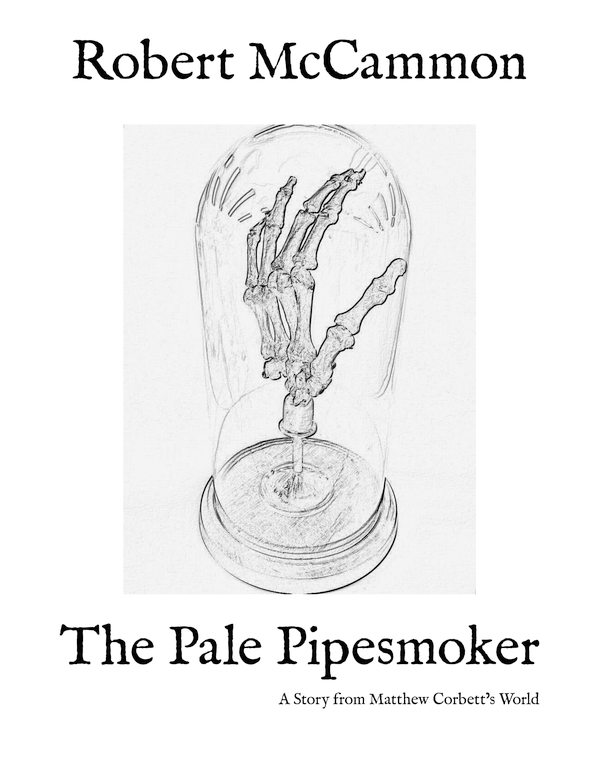 Robert McCammon hopes you’ll enjoy this new story, “The Pale Pipesmoker,” while you wait for the release of Cardinal Black! Set in Matthew Corbett’s World, “The Pale Pipesmoker” features Katherine Herrald and Minx Cutter in a tale that takes place during the timeframe of Freedom of the Mask.

You can read “The Pale Pipesmoker” for free here, or you can download the story in the following formats:

Cardinal Black will be released on April 30, 2019, in trade hardcover, ebook, and audiobook formats! The book launch will take place on April 20, 2019, at Alabama Booksmith in Birmingham, AL.

More news when I have it…. 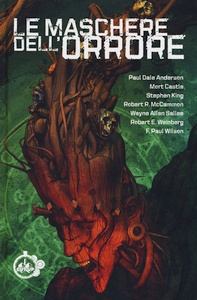 A larger version of the cover can be found in the Book Cover Gallery.

Robert McCammon stopped by the Alabama Booksmith today to discuss the recent Cemetery Dance releases, Tales from Greystone Bay and He’ll Come Knocking at Your Door. Follow the links to purchase signed copies from Alabama Booksmith, and don’t forget the launch event for The Listener on February 27, 2018!

Spanish publisher Kelonia Editorial is releasing a translation of Shadow Show: A Celebration of Ray Bradbury. Their project was crowdfunded in 2017. It is being published in two editions, a gold limited edition, and a silver paperback edition. The cover art is by Carolina Bensler.

Shadow Show was edited by Mort Castle and Sam Weller. It includes Robert McCammon’s short story “Children of the Bedtime Machine,” as well as stories by the editors, Neil Gaiman, Joe Hill, and many more. The book was originally published in the U.S. in July 2012. Translations have also been published in the Czech Republic, Greece, Russia, Israel, Hungary, and Turkey. We’re thrilled to report we have FOUR projects in the works with one of our favorite authors, Robert McCammon! Two of the books are being announced today and will be published at the end of October; a new novel will be announced in a few weeks and published in February; and a Limited Edition of one of his classic novels will be announced next year.

The two books being announced today are Tales from Greystone Bay and He’ll Come Knocking at Your Door, and the signed Limited Editions of these books are expected to sell very, very quickly given the high demand for McCammon’s collectible editions!

PLUS: For a few days only, we are offering FREE SHIPPING on both of these titles to US addresses, so now is the perfect time to place your order!

Note that Tales from Greystone Bay collects three McCammon short stories, and He’ll Come Knocking at Your Door is a heavily-illustrated short story. These are not new novels. For full details on both books, visit the Cemetery Dance website:

Both limited editions sold out around 6 PM ET on August 15, 2017. There are plenty of trade hardcovers still available. 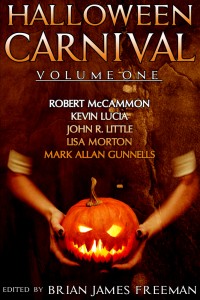 Halloween Carnival is a five-volume ebook series that is edited by Brian Freeman and will be published in October 2017 by Random House/Hyrda. Volume 1 in the series kicks off with a reprint of Robert McCammon’s short story “Strange Candy.” The five-volumes will eventually be published in a hardcover edition by Cemetery Dance.

Here are the details from the Random House website:

STRANGE CANDY by Robert McCammon
Chocolate bars and sour suckers are trick-or-treat staples, but beware the odd sweet at the bottom of your bag. You never know who it’s from—or what it might do to you.

THE RAGE OF ACHILLES by Kevin Lucia
Father Ward should have heeded the warnings about hearing confession on All Hallow’s Eve. Because a man is about to tell him a secret more haunting than any he has heard before.

DEMON AIR by John R. Little
Fear of flying is not uncommon. But on this transpacific airline, the real danger isn’t the flight itself. It’s whoever—or whatever—is up in the air with you.

LA HACIENDA DE LOS MUERTOS by Lisa Morton
Trick McGrew, former cowboy star of the silver screen, has never believed in tall tales. But down in Mexico, the land of La Llorona, he’s about to find out just how real urban legends can be.

#MAKEHALLOWEENSCARYAGAIN by Mark Allan Gunnells
Some people will go to any lengths to rack up retweets, likes, and follows on social media, no matter who they end up hurting . . . or even killing.

The ebook can be pre-ordered from Amazon here.

Here’s the cover for the Cemetery Dance hardcover edition: 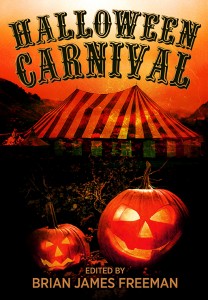 Both covers have been added to the Book Cover Gallery, if you’d like to see larger versions of them.

“Strange Candy” was originally published as a free download here on RobertMcCammon.com. You can read the story online or download EPUB (NOOK) or MOBI (Kindle) files.

Brian James Freeman posted this announcement on his site a few days ago:

Richard Chizmar and I have once again joined forces with the cutting edge team at Hydra, a division of Random House, to produce five more volumes in our acclaimed Dark Screams horror eBook anthology series! Each volume collects stories by the best authors working in the business today, and we’re pleased to announce that Dark Screams: Volume Seven will be published on July 25, 2017!About the Book: Robert McCammon, Brian Hodge, James Renner, Kaaron Warren, Bill Schweigart, and Mick Garris reveal sinister secrets and unsavory pasts in a haunting anthology of short stories collected by acclaimed horror editors Brian James Freeman and Richard Chizmar.WEST OF MATAMOROS, NORTH OF HELL by Brian Hodge
After the success of their latest album, Sebastián, Sofia, and Enrique head to Mexico for a shoot under the statue of Santa Muerte. But they have fans south of the border who’d kill to know where they get their inspiration.

LIZARDMAN by Robert McCammon
The lizardman thinks he knows about all the mysterious dangers of the Florida swamps, but there are things lurking in the bayou that are older and deadlier than his wildest dreams.

A MONSTER COMES TO ASHDOWN FOREST (IN WHICH CHRISTOPHER ROBIN SAYS GOODBYE) by James Renner
Although every child dreams of visiting Hundred-Acre Wood, only one has ever actually frolicked that fabled forest—and survived.

FURTHEREST by Kaaron Warren
She’s been going to the beach since she was a child, daring the other kids to go out past the dunes where those boys died all those years ago. Now she realizes that the farther out you go, the harder it is to come back.

THE EXPEDITION by Bill Schweigart
On a quest to bring glory to the Führer, Lieutenant Dietrich Drexler leads his team into the ruins of the Carpathian Mountains. But the wolf that’s stalking them is no ordinary predator.

SNOW SHADOWS by Mick Garris
A schoolteacher’s impulsive tryst with a colleague becomes a haunting lesson in tragedy and terror when he’s targeted for revenge by an unlikely, unhinged rival.