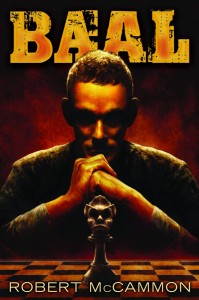 Things on the Robert McCammon front have been really busy of late, so we thought we’d offer a quick guide to what’s going on.

The Hunter from the Woods

We’ve just approved the rough sketches for the five black-and-white interior illustrations that will appear in all editions of the book. In addition, we’ve given Vincent Chong the okay for the two color plates exclusive to the limited and lettered editions, and the full-color endsheets (about which, see more below). The bonus novella—the first time Matthew encounters the supernatural—has been dropped into the limited edition and is being proofed. The Providence Rider is likely to be our most attractive McCammon production yet, and one hell of a thrill ride of a novel. We expect it to land on many fans’ lists of favorites of 2012, so don’t miss out.

We’ve decided to add the full-color endsheets to the signed trade copies (but not the unsigned trade edition), to make them an even better value to collectors. There are only 1000 of these, unlike the nearly 2000 copies that Robert McCammon signed for The Five, so please get your order in soon.

Two McCammon limiteds that aren’t on our immediate schedule, Bethany’s Sin and Stinger, have already been fully designed, and are working their way through the production process. 2012 is really going to be the year of McCammon here at SubPress.

Feel free to head over to our site to order all but the ebooks, where Visa, Mastercard, and PayPal are accepted.