GraphicAudio produced adaptations of The Wolf’s Hour, The Hunter from the Woods, and the Trevor Lawson books. GraphicAudio productions feature a narrator, a full cast of voice actors, sound effects, and music. You can visit their website here.

As of October 28, 2020, these productions are also available through Audible.

Thanks to the fine folks at Crossroad Press, Robert McCammon’s Trevor Lawson books, I Travel by Night and Last Train from Perdition, are now available in ebook formats outside the U.S. and Canada. Both ebooks sport new covers, too.

With these releases, all of Robert McCammon’s books are available as ebooks worldwide.

The CD edition of GraphicAudio‘s TREVOR LAWSON audiobook, which includes both I TRAVEL BY NIGHT and LAST TRAIN FROM PERDITION, is on sale today for only $10. Apply the code TREVOR, and that brings it down to $8.

On top of that, you can get 20% off of their production of THE WOLF’S HOUR using the code WOLF! 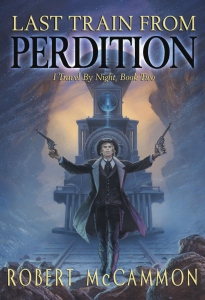 Booklist has published their review of Robert McCammon’s I Travel by Night: Last Train from Peridition. Very mild plot spoilers ahead.

Booklist: Book two in McCammon’s highly entertaining vampire-western series finds reluctant vampire Trevor Lawson and his human sidekick, sharpshooter Ann Remington, still on the hunt for LaRouge, the woman who turned Lawson during the Civil War, in the hopes that killing her will allow Lawson to become human again. It’s now 1886, and a new job takes the pair from New Orleans to the frontier town of Perdition, Montana, to rescue a wealthy young man from a band of outlaws. Lawson tries to extricate the man without violence, but between the outlaws and the vampire Dark Society, it appears a peaceful getaway is not going to be an option. This thrilling story culminates with a fantastic battle scene on a train, where unlikely alliances are formed, adding a new wrinkle to Lawson’s quest for freedom from his vampiric curse. Readers can jump right in, as the backstory details are supplied without sacrificing the pace. This is perfect for Deadwood fans and those who enjoy the American Vampire graphic-novel series by Scott Snyder. Clear a couple of hours, you’ll want to devour this in one sitting.

Click here to order the book from Subterranean Press. The book can also be pre-ordered from  Amazon US, Amazon UK, Amazon CA, and Barnes & Noble.

Here’s the cover and a sample interior illustration from Io Viaggio di Notte, the Italian translation of I Travel by Night, coming this month from Independent Legions Publishing. The art is by Giampaolo Frizzi. 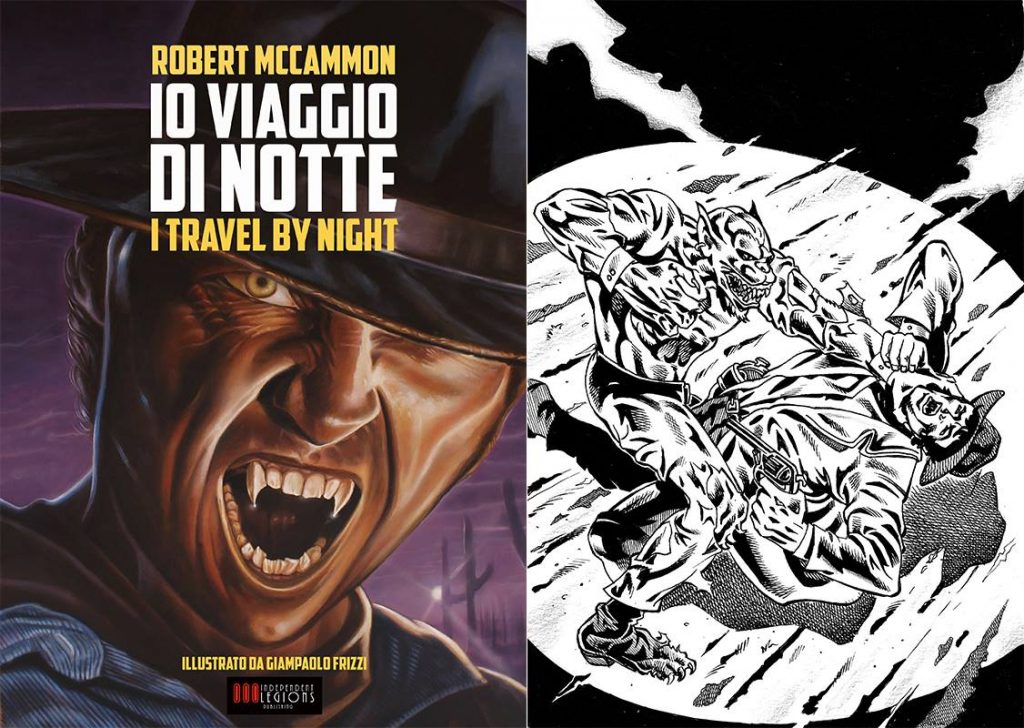 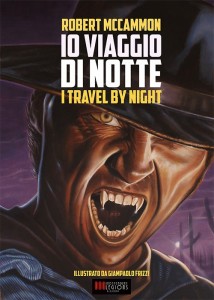 Italian publisher Independent Legions Publishing is publishing a translation of I Travel by Night on July 15, 2016. The Kindle ebook edition can be preordered now at a discounted price from Amazon IT.

Here’s what Independent Legions posted about the book:

Print editions are expected by the end of July 2016. The book includes ten illustrations by Giampaolo Frizzi, who also did the cover illustration. The translation is by Alberto Priora.

The exclusive preorder period for Robert McCammon’s Last Train from Perdition has ended, meaning anyone may order a copy of the limited or lettered edition. (And of course, you may pick up the trade hardcover if that’s more your speed.)

In I Travel by Night, master of horror Robert McCammon introduced the tortured and instantly unforgettable vampire adventurer Trevor Lawson—All Matters Handled—as he searched for his maker, LaRouge, in hope of becoming human once more. It wove a tale about the terrors of the Dark Society, featuring the gothic sensibilities of old New Orleans, and the unforgiving violence of the untamed frontier of 1886. Now McCammon returns to Lawson’s gripping journey and sends him West, in the chilling sequel novella Last Train from Perdition.

Ever on the hunt for LaRouge, Lawson still travels by night, but no longer alone. Crack-shot, whip-smart Ann has become his companion, on her own search for her vampire-taken father and sister. Lawson has been summoned from New Orleans and the Hotel Sanctuaire to Omaha by a wealthy man who needs his son retrieved from a band of outlaws. Lawson and Ann agree to take the case and travel to the town of Perdition where they find their prey—but things get complicated fast when a saloon shootout leaves an innocent girl badly injured.

On a night train from Perdition to Helena to find medical help, it soon becomes clear that Lawson and Ann’s enemies may also be looking to prey upon them. As they struggle against those forces of darkness with a trainload of their most unlikely allies yet, Lawson also wages battle with the darkness LaRouge left within him. This latest installment in Trevor Lawson’s battle for redemption finds bestselling McCammon at his thrilling best. 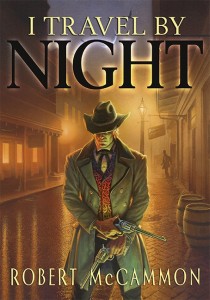 Italian publisher Independent Legions Publishing has announced their acquisition of Robert McCammon’s I Travel by Night. The Italian translation will be available in print and ebook editions in 2017.

Subterranean Press tweeted today that they’ve bought Robert McCammon’s Last Train from Perdition, the 36K-word sequel to last year’s I Travel By Night. The book will be published in Fall 2015.

The hardcover editions of I Travel by Night are sold out from the publisher, but copies are still available from Camelot Books. It’s also available in an audio “movie for your mind” from GraphicAudio and in ebook formats in the U.S.: Kindle |  NOOK |  Kobo